Doodle Bug Club of America to participate in 2016

As part of the Pride of Iowa, members of Doodle Bug Club of America will exhibit their scooters. Webster City, Iowa was the birthplace of the famous motor scooter which turned many heads in its almost 70 years of existence. According to the enthusiasts, the Beam Manufacturing Company decided to design and build a small inexpensive motor scooter powered by a 1-1/2 hp gas engine. The Little Red Bug was sold by Gambles stores under the name of Hiawatha and Western Auto Stores as either Western Flyer or Wheel Goods. The scooters were built in productions of 10,000 each and 40,000 were built between 1946 and 1948. The Doodle Bug Club of America has members from 36 states. To learn more, visit their website at: http://wcdoodlebug.com.

Maytag Collectors to participate in 2016

As part of the Pride of Iowa, members of the Maytag Collectors Club will exhibit a variety of Maytag items. In 1893 Frederick Louis Maytag, joined his two brothers-in-law and George W. Parsons and each contributed $600 for a total of $2,400 to start a farm implement company. The company produced a threshing machine, band-cutter and self-feeder attachments. Farmers often suffered injuries as a result of threshing machine accidents. One of the company's earliest successes was a threshing machine feeder, a device which fed straw more safely into the threshing cylinder. By 1902, the company was the largest feeder manufacturer in the world. Under Fred L. Maytag's leadership, offices eventually were opened in Newton, Iowa. Perfected in 1905, the Success Corn Husker and Shredder became the company's next product development, expanding its farm implement line. After the turn of the century, the company became involved in several side lines. Between 1907 and 1911, the farm equipment line was expanded to include hay presses, hog waterers and numerous specialized feeders and harvesting equipment.

In 1907, the company intended to solve seasonal slumps in the farm equipment business and fill the need for a home washing machine. The "Pastime" washers had a wooden tub with a hand crank that turned and dolly inside with wooden pegs, which in turn, pulled clothes through the water and against the corrugated tub sides. Improvements on the first washing machine were steady. A pulley mechanism was added so the machine could be operated from an outside power source. In 1911 a model with an electric motor was unveiled. Four years later Maytag developed its Multi-Motor gasoline engine washer that became a must to rural homemakers who did not have access to electric power. Expansion into a national company and world leadership came during the first half of the 1920's under L. B. Maytag son of the founder, who served as company president between 1920 and 1926. The company had produced wringer washers for 76 years, and when manufacturing was discontinued, 11.7 million units had rolled off assembly lines. Learn more at: http://www.maytagclub.com. Club president Ron Maymon can be contacted by email at: rcmaymon@evertek.net.

Anyone with Maytag washers, engines or farm equipment is encourage to participate in the Pride of Iowa exhibit.

Albert City's very own Theiman tractor will be one of the exhibits for this year's Pride of Iowa. Promotional literature states that the Thieman Tractor does the work of four to six horses at the cost of one horse or less. The cost of the Theman frame, complete, less the governor assembly was $185. It was recommended to use a recondtioned Model A Ford motor for the tractor. 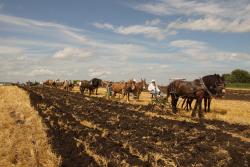 As part of the Horsepower events, the Joan Koenig Memorial Wagon Train will kick off Wednesday, Aug. 10. The wagons will leave Gillett Grove at 10:17 a.m. and head to Webb where they will have lunch. They will then move on to the Marathon Park where they will circle the wagons for an overnight stay. On Thursday, they will leave at 10:17 and head to Albert City. After lunch there, they will head to the show site and prepare for horsepower events that start Friday. Anyone interested in participating in the wagon train should register using the Horsepower registration. Follow the event on Facebook at: https://www.facebook.com/events/882996835152830/ 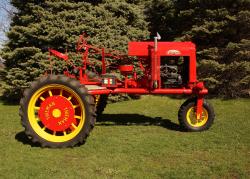 The 2016 Tractor Raffle will be for a Thieman Tractor or $2500 in cash. This tractor is from the early 1930s and was manufactured in Albert City with a Model A motor. A raffle for a children's pedal tractor is also available. Tickets are $5 each or 5 for $20.  As part of the HorsePower activities, a horse buggy and a hand-made quilt be raffled. The buggy is a completely restored two-seat taxi made by Morgan and Williams in the late 1800s. It is complete with makers tags and taxi number. Tickets for the buggy are $5 each. The queen size quilt features horse photos from the last seven shows. Tickets for the quilt are $1 each. The raffle drawings will be held Sunday, Aug. 14 at 4 p.m. and you need not be present to win. 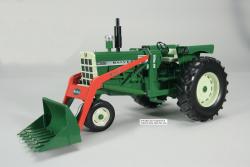 This year's collectible toy tractor is an Oliver 1800 Narrow with New Idea Loader. The tractors are manufactured by SpecCast and each includes a serial number. There were 100 tractors available and for those who purchased one last year, they can continue to purchase the same number of tractor. Those not purchased will be available for sale during the show at the LeMars Toy Store booth at the toy show. The #10 tractor will be included as a prize in the large tractor raffle, so if you purchase a ticket for that raffle, you are automatically included for a chance to win the toy tractor.

The Albert City Threshermen & Collectors were successful at their world record attempt for the greatest number of draft horses plowing which took place Saturday, Aug. 13 at 4 p.m. There were 120 draft horses that plowed simultaneously for one minute and eighteen seconds. To break the record, the furrow had to be plowed to a depth of at least six inches. The event was made even more difficult as a thunderstorm approached minutes before the start and dumped rain over the 800 foot plowing field. This record will still need to be verified, but it is expected to break the current record of 84 draft horses plowing simultaneously for one minute. That record is held by a draft horse organization in the U.K.

An attempt to set a new world record for the greatest number of mules plowing simultaneously was also made during the Albert City Threshermen & Collectors Show. It was done Sunday, Aug. 14 at 1 p.m. The event was successful with 27 mules plowing for one minute and six seconds. The furrow was plowed to a depth of eight inches. Once verified, this would be a new world record.

Both of these events were held during the 46th annual Threshermen & Collectors Show which featured Horsepower this year. The feature brought over 200 horses and mules to the show to participate in a wagon train, plowing and other horse-powered farming activities. They came from far and near including the states of Penn., South Carolina, Michigan, Ohio, Kansas, Missouri, Tennessee, Minnesota, Nebraska, South Dakota, and Iowa.

Make a Donation to the Albert City Threshermen Show

We are a 501c(3) organization with the show operated by volunteers. Donations can be designated for specific areas, such as the land fund, or will go into the general operations fund. All donations are tax deductible.